The Surveillance and Policing of Looted Land.

AUTOMATING BANISHMENT is a community-based report envisioned, researched, drafted, and edited by dozens of people coming together to study the relationship of “data-driven policing” to real estate development and settler colonialism. The report comes from the Stop LAPD Spying Coalition’s Land and Policing Workgroup. But it belongs to the community, produced through collective study and grassroots self-defense. To join our work, email us or sign up for the community discussion groups we're planning. You can also make a donation to our work.

This report begins with an introduction that situates the analysis in our organizing campaigns and then continues in six parts:

Part 1: Not a Moment in Time chronicles the centuries-long history that stands behind policing and surveillance of land in Los Angeles. The goal is to offer a historical overview of the history of policing, conquest, and displacement.

Part 2: The Architecture of Data-Driven Policing analyzes the programs, tactics, and tools that LAPD built its data-driven policing programs through, including their first-generation “predictive” policing programs as well as collaboration with other agencies. The goal is to introduce these programs, partnerships, and methodologies in order to later examine their use in displacement and gentrification as well as their evolution over time.

Part 3: Real Estate and Capitalist Crisis uncovers links between policing, capitalist crisis, and real estate development. The goal is to share examples of these connections, which we uncovered in our organizing and research, in order to frame what inspired our deeper dive into these issues.

Part 4: Containment, Development, and the Fight for Freedom in Skid Row is the first of our two deep dives into data-driven policing’s role in displacement, this one focusing on the history, present, and future of development and policing in Skid Row. The goal is to show how policing and surveillance have long been used to contain, blight, and banish Skid Row residents, with data technologies helping to automate this harm.

Part 5: Racial Terror and White Wealth in South Central is a deep dive into the role of LAPD’s data-driven policing systems in gentrification and displacement of South Central L.A. The goal is to show how police terror and surveillance work in tandem with real estate development to banish Black and brown people and secure white wealth.

Part 6: “Reform” of Data-Driven Policing and “Predictive Policing 2.0” examines LAPD’s new Data-Informed Community-Focused Policing framework, launched in 2020. The goal is to analyze the reformist strategies that are being used to obscure, excuse, and broaden the violence of data-driven policing.

Finally, the conclusion lists our demands and examines what it will take to abolish data-driven policing.

The analysis in this report builds on Before the Bullet Hits the Body: Dismantling Predictive Policing in Los Angeles, which we published in 2018. Two years later, we published The Algorithmic Ecology, an organizing tool we created with the activist group Free Radicals. This tool maps the need to organize against the entire ecosystem that surrounds police algorithms, beyond the technology. Below is the Algorithmic Ecology tool applied to the PredPol “predictive policing” software discussed in more detail in part 2 of this report. 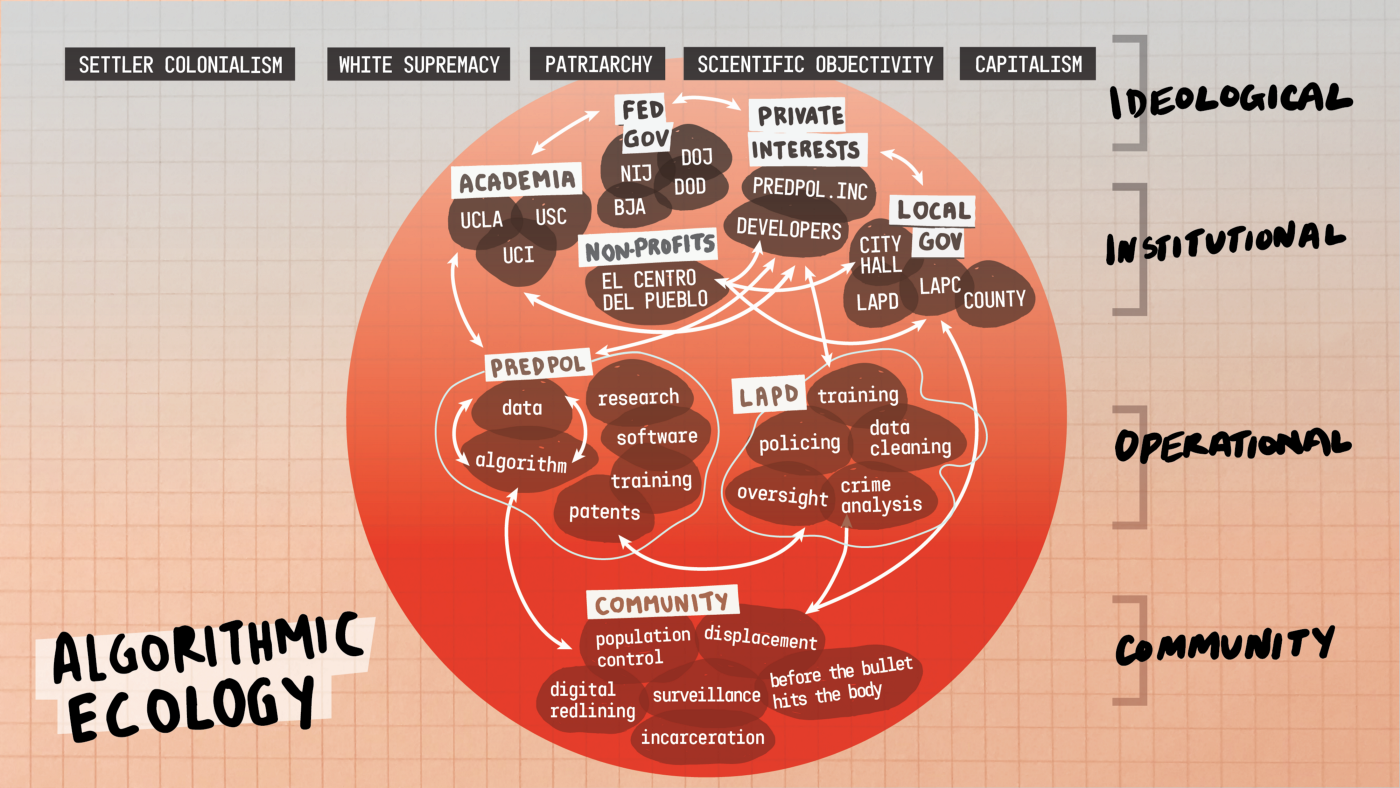